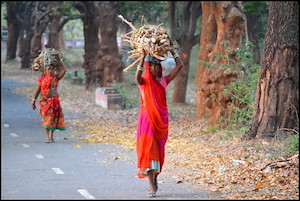 India reached a new low in the Global Hunger Index rankings since it began in 2000. The country ranked 102 (out of 117 qualifying countries), lagging behind its south Asian neighbours. This ranking comes amidst one of India’s most significant economic slowdowns in its independent history, and weeks after the Prime Minister launched the ‘Fit India’ campaign, exhorting Indians to exercise regularly to improve their fitness. What do the people in India’s heartlands make of this situation?

A joke on the common man

That the reality of everyday hunger of millions of Indians – where do roti bhi nahin milti hai – is something that most politicians are out of touch with, was a common refrain. ‘How will we do kapalbhati or yoga if we don’t eat two meals a day?’ said one listener. ‘Who is “Fit India” for, because it is apparent that politicians have no clue about the everyday struggles of the common man?’

If there is no food, how do we start to talk about getting healthy, asks another. Across the board, listeners shared their disappointment and anger at the government churning out one campaign after the other – Digital India to Swacchh Bharat to, now, Fit India – without taking the steps to achieve their objectives.

The Global Hunger Index, released by German organisation Welthungerhilfe, is calculated based on four indicators: undernourishment, child wasting, child stunting, and child mortality. Despite progress on reducing child mortality, India struggles on the health of children under the age of 5, often determined by the status of the household into which they are born. 1 in 2 pregnant women is anaemic. NFHS-4 states that 38% of children under the age of 5 are stunted (low height for age) and 20% are wasted (low weight for age), both of which indicate poor nutrition.

These numbers indicate shockingly low access to nutrition for many Indians. What options do economically weaker sections have to eat nutritious food?

Anganwadis and midday meals are programmes from governments to attempt to provide children nutritious food and ensure their school attendance. The midday meal scheme suffers from several issues that put its beneficiaries – government school students until class 8 –  out of reach of nutritious food, ranging from linkages with Aadhaar, to privatization, corruption and not meeting government guidelines for nutrition, to poorly paid cooks who end up having to protest for the right against discrimination and to a decent, minimum wage, as our recent story shows. Shivshankar Mandal from Madhubani, Bihar, shares how teachers end up stealing food grains procured for children in schools under the midday scheme, which leaves midday meal cooks with even lesser to cook.

Going from the school to the family space, the most important space for children – or adults – to access nutrition, the Public Distribution System (PDS), implemented since independence, is the lifeline for millions of Indians to get grains and pulses at highly subsidized rates. Despite this, recent years have seen deaths of children and old people due to starvation from not being able to access the PDS, with its linkages with Aadhaar featuring prominently in most of these.

As per India’s National Food Security Act (2013) “the government must provide five kg of a monthly supply of subsidised food grains per person to two-thirds of the country’s population. But reports show that the identification of beneficiaries under this law has had problems, with many poor people not making it to the lists. And even those who were listed as beneficiaries were reportedly being denied rations because of the government’s decision to link the public distribution system to Aadhaar.”

Ramao Jagat from Chattisgarh’s Bilaspur talks of the difficulty in getting a ration card (used to access PDS) made, and if lucky enough to get one, of the issues in purchasing grains, often being dependent on the whims of the shopkeeper. He also complains of the poor quality of the grains and pulses available at these. He also stresses on the importance of standardization in the pricing and quantity allowed for purchase for families across the country.

Even as entire families struggle to access nutrition, it is important to remember that the situation is far worse for women and girls, who, due to socio-cultural norms, are the last to eat and left with the least – both in terms of nutrition and quantity.

Health or fitness without employment?

The overwhelming response to the hunger crisis from Mobile Vaani users was to ask the government to focus on creating jobs instead. With rampant unemployment, users had strong questions for the government’s and politicians’ focus on campaigns like Fit India instead of taking concrete action to create jobs to engage youth across the country.

Tulsi Paswan from Madhubani, Bihar, says that options for employment in the state, such as factories or for business, are non-existent. Anuja Dubey from Godda, Jharkhand, shares that unemployment is a bigger issue for women to tackle, leaving them with few options to earn and feed nutritious food for their families. Vice President of CITU’s Jharkhand committee, Ramchander Thakur, says in an interview with Mobile Vaani, that capitalists are grabbing land, water, and other resources from people to make profits, leaving nothing for the starving millions and denying them purchasing power.

Mobile Vaani has tracked the status of labour in the country over the last year through its Shram ka Samman series, which shows a dismal picture of not just employment, but of living conditions of labourers across the country. Without strong social safety nets that are nuanced to account for regional, caste, class and gender differences, and not tied to flawed identification, India continues to be far from being well-fed and fit.