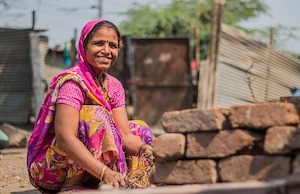 MGNREGA: No incentive to stay back

Ranjan Kumar describes the enthusiasm with which his friends and neighbours got their job cards made after NREGA was introduced. ‘Some of them travelled far to get it, as far as the block or district office.’ The card was made, but not all of them got it, he claims. ‘And even if they got it, they didn’t get to use it,’ he says, complaining about the lack of awareness among many people about how to use the job cards to access their MGNREGA benefits.

The Mahatma Gandhi National Rural Employment Guarantee Act (2005), MGNREGA, which aims to provide a right to employment, is meant to be a safety net for very poor rural households, especially those that depended on the vagaries of agricultural labour and may be forced to migrate to look for work in the months between sowing/harvesting, when they don’t get work on farms. NREGA was conceived to give employment for 100 days to households that demand it – within 15 days of the demand being made. The scheme has been described as ‘one of the strongest tried and tested measures that this government has to address the high levels of unemployment and declining farm incomes that have led to the situation of acute rural distress across the country.’

As of 2019, 13.11 crore job cards (which allow individuals to apply for work) have been issued, of which 7.4 crore are active (i.e. a household member used it to work at least one day under NREGA in the last three years). NREGA has much demand, as evidenced by the number of people who responded to our prompt asking them to share their experiences about the employment guarantee scheme.

In part 2 of our series on Shram ka Samman, we discussed the failure of agriculture in ensuring a living wage for farmers, a significant factor in distress migration. Our callers indicated that migration was the last resort after their attempts to stay in the village and tap into government income options, such as MGNREGA, have failed. In this article, we focus on what users have to say about NREGA, and the potential for the employment guarantee scheme in addressing distress migration and rampant unemployment.

A source of hope, even if bleak

Rinku Devi from Nagarnausa (Nalanda), Bihar, doesn’t want to move away from her village for work.

Issues regarding NREGA came up frequently in our users’ experiences. Here are some issues that were described.

Statistics tell the other end of the story of how NREGA could be doing better. In 2018-19, NREGA generated a massive 268 crore person days, higher than in the previous three financial years, even though the average number of days available to each household – guaranteed to be 100, was only at 51. The average (national) wage rate was 179 rupees, and in some states, lower than the agricultural minimum wage. In many states, the average wages that were actually paid were less than that notified by the government.

Despite this underperformance and labourers’ issues in accessing NREGA, the idea that comes up, among the intended beneficiaries and many policy specialists, is that it is an important safety net that protects the extremely poor citizens who are landless labourers or are farmers tilling very small plots of land. Besides, the scheme’s guaranteeing of a particular wage has been credited with increasing agricultural wages as people have been seeking work under NREGA even during agricultural season, by reducing the labour supply – an argument that has often been made to dilute the scheme, including a recent proposal to use its funds to subsidise farmers in hiring labour, which was heavily criticised. Finally, NREGA has also played a role in bringing more women to the realm of paid employment, by guaranteeing that at least one-third of the jobs should be given to women (with actual uptake going to 50% in the last 5 years), and by ensuring parity in pay for men and women. Studies have shown that NREGA has ‘played a positive role in increasing rural wages, especially for female workers.’

Indeed, as stated in a letter by activists and elected representatives against the dilution of the Act, ‘there is substantial evidence to show that it has played an important role in protecting the lives, livelihoods and wages of rural workers, and been a vital support to vulnerable communities, including those facing distress due to natural disasters and calamities.’

However, as has been identified by experts and activists, as well as our users, the potential of NREGA is getting stifled due to poor funding – which means wages are ridiculously low – and due to problems with digital leapfrogging that has left out many deserving employment-seekers.

The increase in demand for NREGA – the government had to provide 268 crore person-days in 2018-19 compared to 233 crores and 235 crores each in the previous two years – reflects deep rural distress and unemployment. Shalini Nair reports in The Indian Express analyses of how drought and agrarian crisis have spurred the increase in demand for NREGA.

Despite this, funds allotted to NREGA in the interim 2019-20 budget were lower than that of 2018-19. If states require funding higher than that allotted to them, the Government of India is bound to reimburse these. This gap in funding has only been increasing over the years and has resulted in delayed or in some cases non-payment of wages.

With low funding raises, wage rates have also stagnated, or increased from a meagre 1 to 17 rupees across states, a move that has been criticized by activists and economists alike. The NREGA Sangharsh Morcha, which works for the rights of NREGA workers, calls for 600 to be the minimum daily wage, keeping with the seventh pay commission recommendation of 18,000 rupees as the minimum monthly salary.

The call for higher wages was echoed by many of our listeners, including Balram, who believes that NREGA is a very good opportunity. ‘But with the wage rate, it is impossible to educate children – and therefore illiteracy prevails. The wages have to go up to at least 400 rupees a day for the scheme to make any dent in people’s lives’.

Having an Aadhaar card was made mandatory for people to be able to access government social welfare schemes, including MGNREGA. Issues of linking Aadhaar to social welfare schemes have been explored in detail. Reetika Khera, economist and social scientist, points out how the gaps are larger with NREGA, because the responsibility to inform NREGA beneficiaries about the requirements to access its benefits, falls between the cracks, with the result that individuals don’t realise simply why they are unable to register for work or get payments.

Linking Aadhaar to their job card – and ensuring that the bank account tagged with their job card (a mandate since 2008, when NREGA transfers were made directly to bank accounts) is also linked to Aadhaar – is a complication that escapes most labourers who haven’t been given the information and steps to take.

The experience shared by our user Dhaneshwari Markam (above) perhaps reflects this very confusion: where wages were ‘lost’ because users don’t know simply to which bank account the payment was made.

NREGA: Important, but needs to be revamped

NREGA is one of the most important legislations in India that has enacted for the benefit of its masses. By being universal, but prioritising self-selection, it has, for the most part, avoided issues of excluding those who need it the most.

All said and done, there are mixed opinions about NREGA’s benefits for the individual and for the village. Sangeeta Devi from Nalanda, Bihar, is all praise for it, for instance. ‘People here like NREGA work,’ she says. ‘Wages get deposited within 20 days in our bank accounts.’ She lists the developmental work that has happened in her village due to NREGA: ponds, platforms, fixing issues of water stagnation in schools, road constructions, and so on. ‘The good thing about NREGA is that along with getting work, it helps with the development of the village.’

Some others aren’t as positive, such as Pujari Tiwari, who says that the Samudayik Bhawan built in his village through NREGA is hardly used – and is sometimes a spot for cows to be left tied.

Rajbai’s husband has migrated to work at a brick kiln in Ayodhya, all the way from Gariaband in Chattisgarh. NREGA work only came through for around two months, and they desperately needed money for the education of their three children, so her husband went there with the promise of an advance payment of wages. No money had come through from him yet when our volunteer spoke with her.

But Dablu Pandit, a panchayat member from Gidhaur in Jamui, believes in the potential for NREGA. It can be used even for animal or poultry rearing, or for building cow sheds.

The hope placed on MGNREGA isn’t misplaced. The scheme was developed after significant activism and has a component of social audit built in, giving the rights to gram panchayats to audit the utilization of funds and the quality of the assets created through the scheme. Additionally, several organisations and activists are highly invested in monitoring the scheme’s funding and implementation, and drawing attention to issues, such as the Mazdoor Kisan Shakti Sangathan. Such measures have led to the creation of strong community institutions that can help raise people’s grievances and advocate at various levels for resolving issues with the scheme. In fact, lessons from NREGA – including an increase in rural wages and consumption; positive effects in employment irrespective of gender and caste; increased community participation through deciding NREGA work; and the creation of quality assets across rural India – have also been used by the Azim Premji University’s Centre for Sustainable Employment to propose an urban job guarantee scheme.

However, NREGA is bound to fizzle out if immediate steps aren’t taken to address its funding and payment issues, and to retain its original premise and structure. Perhaps some improvement to the scheme and its implementation will give some hope to our listener Ranjan Kumar, who says, ‘Koi bhi sarkar shram ka samman khud nahi karta hai.’ No government respects the labourer, why would anyone else do so?