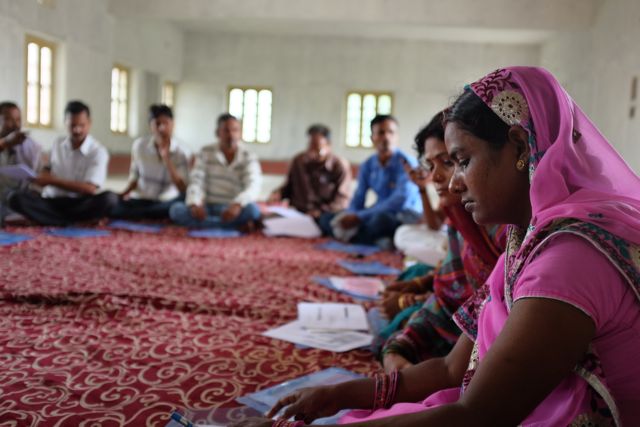 Since the day it started operating, Gram Vaani has always strived to live its name, to be the voice of the village. The different campaigns and projects undertaken by the company is a clear indication of its aspirations. The interesting fact is that, being first of its kind, we were able to give voice to millions to people across the country, change the way campaigns are run and write another chapter in implementation and accountability of projects.

At this point when the only communicative media that can reach to millions of rural households in India is a low-end mobile phone, we have designed and created an Interactive Voice Response (IVR) platform, which suddenly shifts the flow of information to a bottom-up format. With every project and campaign, we are opening up a new possibility on how this technology can be turned into an instrument that can truly bring out the voice of the village. Our recent project with Population Foundation of India (PFI) and Centre for Catalyzing Change (C3India) , shows another significant way how it can be extensively used as a tool in data collection.

Data collection using the traditional paper based method is not the easiest and practical way, especially for collecting data for accountability from a grass root level, and this, in many cases, became the reason for the non-existence of such data. This had led to a system which took advantage of this situation and worked without much accountability. But when the old method is replaced by an IVR, it enables the stakeholders to collect data in real time from a vast audience and thus, ensure better implementation and accountability. It generates data that didn’t exist before, and this is exactly what the IVR for an accountability check list did for the project mShakti implemented jointly by PFI and C3India.

The project mShakti is aimed to strengthen the voice, participation, leadership and influence of Elected Women Representatives (EWRs) within the Panchayati Raj system in order to bring about social change on issues that affect women, particularly family planning/reproductive health (FP/RH) and related issues like Girls Education and Age of Marriage. The activities under this project are geared towards encouraging positive individual change and leadership as well as collective action by women at all three levels of the Panchayat system. The project also aims to strengthen State level advocacy on women’s reproductive health by engaging with women MLAs, journalists and women headed NGO network, Urja. The EWRs from four different districts of Bihar were given special training sessions and following the training, they have been active in Gram Sabhas and have visited health facilities within their jurisdiction, including the Health Sub Centre (HSC), Primary Health Centre (PHC), District Hospital (DH) and also been active in participating and engaging with processes in the Village Health, Nutrition and Sanitation Day (VHNSD).

In order to support the EWRs to monitor the facilities at the above mentioned health facilities,  four checklists was developed for use at the level of VHNSD, HSC, PHC and DH. Broadly, these checklists track availability and utilization of Family Planning/Reproductive Health services, including availability of equipment, medical supplies, personnel and infrastructure facilities. They also track financial management (such as untied funds) and community participation through Rogi Kalyan Samitis. The tracking is done using Gram vaani IVR platform which enabled collecting and recording data easier using their mobile phones. The voice- based system which can guide the user through the IVR sequence has options to provide data, record messages, listen, comment and give feedback to messages. It also has surveys to be taken by the users.

The elected women representatives (EWRs) have been enthusiastically using the checklists and collecting information with support from C3 India and local NGO partners. Data has been generated covering 421 VHNSDs, 109 Sub-Centres, six 24×7 PHCs and three district hospitals spread across 6 selected blocks across 3 districts.

The objective of this effort is not only to empower local women leaders to lead in improving services for women’s health but also to work with the system to enhance quality of services under NRHM by ensuring accountability at all levels.

In the month of February, 2013, convergence meetings were organized in Muzaffarpur, Aurnagabad and Sitamarhi where the EWRs presented their findings related to gaps in health delivery system such as non-availability of examination table, lack of basic infrastructure, non-functional weighing machine, unavailability and un-utilization of untied fund,  lack of contraceptive and blood storage facility etc. relevant officials such as the Civil Surgeon, District Panchayati Raj Officer (DPRO), Additional Chief Medical Officer (ACMO) and District Immunization Officer (DIO).

These women have been able to effect a visible improvement in the quality of the VHSNDs in their constituencies and have also taken up other issues like local infrastructure, quality of education, retention and enrolment of girls in schools, facilitating entitlements under various schemes for the poor, etc. These changes are reflected in the statistics relating to their participation at various meetings – both within Panchayats and the health system (the VHSNDs for example)

mShakti has also been able to mobilise women MLAs from the Bihar Vidhan Sabha who have committed to support the issue in the coming months.