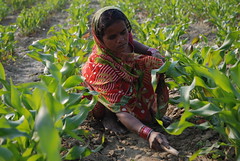 Vijay Sharma from Hazaribagh, Jharkhand, grows potatoes and some wheat, but couldn’t manage any more because of lack of irrigation facilities. ‘Sevaks and Krishi Mitras all live in the blocks, so there’s no one to give us information to help us.’ Most local youngsters have migrated; education is out of the question for them because we’re living hand to mouth. ‘Agricultural schemes aren’t working: getting an electricity connection took me four months. Another loan official sent me on a wild goose chase saying my Aadhaar number was wrong, but nothing happened even after I changed it.’

Our latest campaign on Mobile Vaani, Shram ka Samman, on the status of workers and labour in India, highlights many such stories. In part 1 of a series of articles on the campaign, we talked about migrants – why they migrate and what they face in the places they move to for work. In this article, we talk about the situation of employment in rural India, especially the desperate state of agriculture that millions of Indians from rural areas try to leave behind and migrate in the hopes of better income and a better future.

Gross Value Added from agriculture – outputs less the cost of all inputs and raw materials – were at their lowest in 14 years during the October-December 2018 quarter[1], the time when we were gathering opinions of people in rural India on agriculture through Shram ka Samman. Azim Premji University’s ‘State of Working India’ report cites statistics from the NSS Situation Assessment of Farmers Survey, which highlight that for 20% of the households that owned less than 2.5 acres of land, wages were the primary source of income – even in a sector where self-employment is prevalent. The various dimensions of India’s farming crisis have been well-documented, be it farmer suicides; the protests, increasing in participation and agitation; the surpluses that are dumped; or the stark, dry fields[2].

The causes, known and shared for decades, are echoed by our listeners too: the poor status of irrigation across the country – while also the fast-depleting reserves of groundwater due to exploitation; the government-set Minimum Support Prices (MSPs), which farmers say don’t reflect the costs that go into inputs and production; the devastation wreaked by natural calamities; the smaller landholding sizes that are only worsening with the rise in population.

Listen to Balram Chaudhury here, and to the farmer from Sikandra, Jamui, Bihar here.

Farmers’ demands and their efficacy in reviving Indian agriculture

Ironically, even as some farmers make demands, there are others in the Mobile Vaani community who contest the effectiveness of these. Several such demands have also been questioned by experts and economists, reflecting that policymakers requires an in-depth – and localized – understanding of the issues in agriculture, rather than reverting to solutions that may have worked in previous decades but may no longer be relevant. In this context, it also becomes imperative to encourage farmers to collectivise and learn to understand and dissect policies devised for agriculture.

In the following sections, we outline the key issues and demands shared by farmers speaking on the Shram ka Samman campaign, and what we believe these mean for the state of agriculture in the country.

Lack of water is a huge complaint. Farmers such as Balram Singh and Mukesh Kumar from Bihar said they migrated to a city after losing their crop because it dried out due to poor irrigation facilities.

Irrigation infrastructure was among the top pushes of India’s Green Revolution, with policies devised then continuing to hold sway today, such as diesel and electricity subsidies for farmers to dig borewells. For instance, Teknarayan Prasad Khushwaha from Hazaribagh, Jharkhand, says the government’s attempts to build ponds (for fish farming) are futile because they didn’t dig deep borewells that will ensure water “all year round”.

However, groundwater tables across the country are severely depleted, and this is no sustainable solution. Economist Bina Agarwal also talks about the need for regulating groundwater extraction for irrigation as well as techniques to conserve water. Some farmers realise this too. Kunal Singh, a young farmer from Jamui, Bihar, discusses the need for training on efficient irrigation techniques rather than depending on tubewells and free power, which deplete groundwater. ‘This will cause worse problems’, he says.

Prices that farmers get for the crops they plant are the most frequently raised concern. The Minimum Support Price, a safeguard for farmers from forces of the market as it is the price at which the government will procure the produce from farmers, and a signal to the market on the rates below which crop prices may not fall.

The MSP is announced at the beginning of each crop season every year, but farmers complain that it is usually insufficient. For instance, Nand Kumar Mishra, a small farmer shared on Gidhaur Mobile Vaani that despite “working day and night”, he doesn’t get the right prices for his harvest, which makes it tough for him to make ends meet and fund the education of his children. Many farmers have complained that the price is so far off the mark that often it doesn’t even cover input costs. As Vijay Kumar Singh from Jamui, Bihar, says, ‘Others decide the prices of inputs and the value of our crops, but it is we who bear the costs’.

Not only is the price insufficient, the implementation of this idea of MSP and government procurement capabilities also falls far below expectations. Government procurement centres are few, and even these aren’t required to purchase crops at any rate higher than the MSP. Our own experiences[3] trying to gauge the usefulness of PACS, farmer-operated cooperatives that are also a platform for government’s crop procurement, show that MSP purchases don’t reach most farmers: the quotas for each PACS centre for crop procurement end up getting utilized by large farmers, leaving marginal farmers with no option but to sell to local traders at prices lower than the MSP.

What, then, can be the solution? Several users of Mobile Vaani said that farmers should be actively involved in devising the MSP each year. Arvind Kumar from Samastipur, Bihar, for instance, states that farmers should be given the right to decide the rate at which crops are sold. Indeed, the idea of the “right to sell at MSP” has been mooted for some time now, although with little on-the-ground impact. The Swaminathan Commission recommendations, which many farmers we speak with want implemented, include setting the MSP by pegging it to the cost of production. But this will also not have the desired impact, as it might only serve to ensure the farmer doesn’t go into loss, with little scope for a profit.

Loan waivers – announced in eight states as of end 2018[6] – have overwhelming support from farmers. Farmers such as Suresh (Jharkhand), Shravan Yadav or Niranjan Kumar (both from Bihar), believe that loan waivers are “100% beneficial” for farmers. Ram Lakhan Jadhav from Bihar says that loan waivers “free” farmers and they no longer have to live in fear of having to sell their land to make ends meet; they can think of the ways forward.

Loan waivers as a sustainable strategy to revive Indian agriculture have been questioned by many economists, and Bina Agarwal sums it up thus: ‘They deplete state finances, undermine bank culture, and barely reach 20-25 per cent farmers who have access to institutional credit, but not the marginal farmers or labourers who depend on moneylenders, or get no credit at all.’4

Indeed, farmers on Shram ka Samman pointed the difficulty in accessing bank credit, which means loan waivers might not reach those who need it the most, as they may not have borrowed from formal credit sources. Sunil Mandal from Dhanbad, Jharkhand, explains how, for many farmers, land records are in their grandfathers’ name, which means banks might not lend in their name. The number of documents to produce and changes to make dissuade many farmers who have migrated out of distress from accessing these loans, as they end up missing work days and therefore lose pay in the process.

All the same, loan waivers are considered a useful stop-gap solution for the debt-ridden farmer. Kavitha Kuruganti from the Alliance for Sustainable and Holistic Agriculture discusses that while loan waivers could be useful, these need to be followed by holistic strategies to ‘prevent farmers from falling back into an unbearable situation of indebtedness’[7].

Farmers also recognize that loan waivers only bring temporary relief, and believe that subsidies are the way to go. Although Surendar (Bihar) is all praise for loan waivers being given in other states, he believes that the next step is to provide subsidies for inputs such as seeds and fertilisers, and electricity, among others. Many farmers echoed this call for subsidies, retaining a Green Revolution-era process that has since been considered redundant4. Over the last decade, subsidies are increasingly being considered through the mode of direct transfers to farmers’ bank accounts, rather than on specific inputs, leaving the decision on how to use the cash to the farmer. The Telangana direct transfer scheme for farmers is often held up as a successful case study. The usefulness of these, however, should be considered in the Indian context of poor financial inclusion and the limitations of digital payments technologies, which are often used for these transfers[8], and fundamentally, whether the direct transfer goes to farmers who need it the most5.

What this means: Suggestions from economists on moving away from the subsidy culture include encouraging farmers to shift to ‘low-cost, low-external input ecological agriculture’7 and research and adoption of productivity-enhancing methods and crop insurance based on rainfall estimates4. Even as access to formal credit for farmers needs to be strengthened, Kuruganti suggests that credit products designed for farmers should include some relief for them in case of disasters or losses, which puts them in the face of “unlimited liability”.

The question of reviving Indian agriculture has kept politicians, bureaucrats and experts busy for decades, with solutions being routinely doled out and failing. Even seemingly good solutions fail for reasons that have to do with the complexities of data collection, technological connectivity, financial inclusion, and so on. An in-depth, non-populist understanding of farmers’ issues are needed, with the representation of farmers across landholding size, caste, tribe status, and, importantly, gender, since policies often assume that the principal farmer is male, ignoring ground realities of women-farmed land and women farming in the absence of men who have migrated.