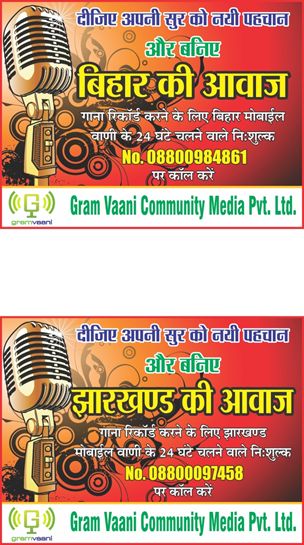 A newspaper advertisement conveying information about the competition on JMV and BMV was floated in major newspapers of Jharkhand and Bihar. Those wishing to enter the competition were asked to call on JMV/BMV number and follow the instructions in the pre-recorded prompts that would help them in recording their songs. Further, the prompt also informed people that they could vote for the songs they liked the most, however, there were a lot of ties due to the voting process. Hence towards the end, one winner each for JMV and BMV was selected by a draw of lots.
While Sushma Priya Gupta from Ranchi, Jharkhand won the title of “Jharkhand ki Awaaz” for her entry, Komal Jha from Darbhanga won the title of “Bihar ki Awaaz” for her song.

Many more interesting entries were left on JMV that came not only from Jharkhand but also from other states such as Gujarat. People very innovatively left Khortha and Nagpuri songs and some even played the guitar while sending their entries for this competition. Following are some of the best songs received on JMV during the competition.
1. Gangadhar Mahto, Dhanbad
2. Alakh
3. Thakur Bhagat, Gujarat
4. Sushma singing Nagpuri
5. Gangadhar singing Khortha
6. Shanu (On guitar)