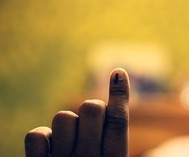 As the nation churned in the course of an election that lasted nearly 40 days, bringing forth debates and discussions from all corners of the country, watching from the sidelines were millions of migrants – people who’d left their villages and towns to move to other states in search of work, and in the process, unable to participate in exercising their right to vote.

Why are migrants unable to vote – in their destination city or in their hometown? What assistance do they expect in this regard? Here’s an assortment of opinions from Mobile Vaani users who reported on Shram ka Samman on how their migrant status affected their participation in choosing the next government.

Going back to vote is a costly affair for most migrants, especially those that have moved to other states. It entails taking time off, a luxury for many since it is uncertain if they will have their job when they return. ‘It will require at least four days,’ says Krishnapal, asking who will pay for this – both for the journey and for the possible loss of income he will incur in the time he spends in fulfilling a ‘duty’.

Many Mobile Vaani users pointed out that while they were aware of their right – and duty – to vote, governments did not do much to get migrant workers within India to vote. Ranjan believes that over 100,000 young people have migrated from Chakai and Sikandra blocks of Jamui district in Bihar. ‘On the one hand, the government keeps asking us to vote, but on the other, it’s not doing anything to stop migration [due to which many young people are unable to vote].’

The request for special provisions for migrant voters came up often in users’ thoughts around elections. ‘It’s the government’s and the Election Commission’s responsibility to think about how to get migrant workers to vote,’ says Sanjay Mahto from Giridih, Jharkhand, brother to Ajay Kumar Mahto who has been migrating seasonally for work for eight years now.

Although the government has previously floated attempts to open up voting for Non-Resident Indians, similar provisions haven’t been considered for migrant voters. Solutions aren’t easy to come by – or even proposed, with the massive increase in requirement for poll officers, awareness-raising, and potential misuse being given as excuses. Several users were baffled that a country that was pushing digital solutions for everything from PDS (for food grains) to banking was not considering online solutions for voting or approve the use of biometrics for voting.

However, a few users don’t believe that migrant workers require special provisions to fulfil their electoral duty – such as Shivam Kumar from Uttar Pradesh, who believes that they have to take the efforts to vote because the government has given them the right to vote.

What does it mean for migrant workers to take the steps to vote? An Indian citizen is allowed to change the address on their voter ID to ensure that they can vote if they move anywhere within the country. The process, however, is cumbersome, as this article by Shonottra Kumar from the Vidhi Centre for Legal Policy highlights: there isn’t a fixed timeline indicated within which the Election Commission will complete the transfer of a voter’s constituency; there is no appeal mechanism, either – and this is assuming that the voter knows in the first place how they can access the service to change the constituency from which they can vote.

Exacerbating these issues is the fact that many migrant workers are seasonal, and few have the privilege of having address proof that they can use to change their constituency on a voter ID.

Our work with Saajha Manch has shown, over and over, how many migrant workers in Delhi-NCR are unable to access social security or employment benefits because they don’t have proof of address or of employment.

When voices of migrant workers aren’t enforced through an election, it is hardly surprising if their concerns are represented in election manifestoes. Many users talking to us as part of Shram ka Samman registered their disappointment in manifestoes of most parties, stating they did nothing to quell their questions about increasing local employment or improving facilities for migrant workers.

Since March 2019, we have been reporting different factors that lead to migration, and the struggles that migrants face in their destination cities in the Shram ka Samman series. News media, community based organisations, and platforms such as Mobile Vaani attempt to carry their voices farther. But unless these migrants are able to vote, these voices cannot be a sufficiently strong enough force for action that changes their lives for the better and addresses their issues with livelihood, safety, and income. These concerns aren’t new; studies have been submitted to the Election Commission of India, but with little movement towards a solution.

An incident from early June that we covered in our labour rights platforms aptly summarises the discussions we’ve had on Shram ka Samman. A young Oriya boy working in Tirupur, Tamil Nadu, was beaten up badly by locals following an altercation. This unfortunate turn of events reflects simmering anger and tension among both local workers and migrant workers.

Local workers are angry that while employers treated them with respect earlier, they are now casually tossed aside for migrant workers who work at lower rates and put up with unfair working conditions that employers impose to exploit the migrants’ vulnerability. Local workers complain about the jobs and benefits they lose to migrant workers, but also the inflated prices they have to pay as rent or for transportation, rates that are charged for the migrant workers. Migrant workers, on the other hand, complain of ill-treatment by local workers and their employers who pay poorly and don’t provide them the social benefits they are entitled to. They are unable to access their Provident Funds, or use their Employee State Insurance, which offers medical benefits, because they don’t know how to make these work.

This incident highlights the need for workers to see the common ground in their predicament, and to put forth a collective voice, be it through unions or through elections. Our attempt with Shram ka Samman was to bring forth, in workers’ voices, the issues they face, and the solutions they propose for addressing these. Even as employers exploit and benefit from rivalries and aggression between workers, low wage workers, no matter which state they hail from, share common interests in working together to ensure equal entitlements and constitutional rights for all workers, local or migrant.