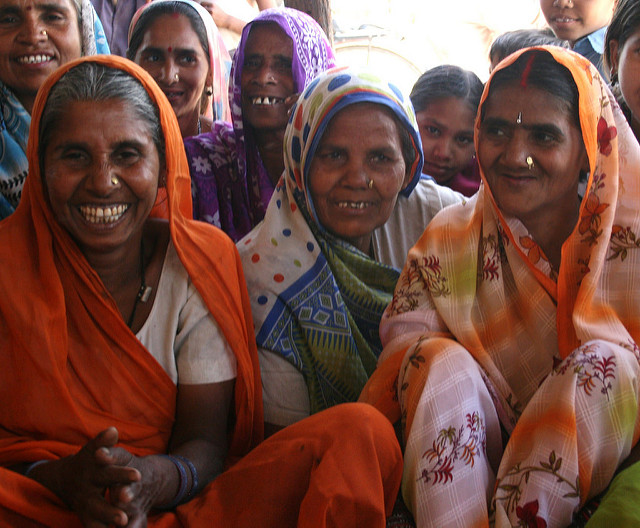 “There was much I didn’t know when I was within the four walls of my house,” said Manju Devi from Hazaribagh district of Jharkhand, an elected woman representative (EWR) from her village. “But there is much I learnt – and am still learning – once I stepped out.” Following this, she candidly lists areas where she was successful in her position and where more work was required.

Manju Devi’s statement would make our lawmakers proud, for she exemplifies their intentions with the 73rd amendment of the Indian Constitution. Formalised in 1992, the amendment gave people power to elect members to Panchayati Raj Institutions, or PRIs, and reserved at least one-third of the seats for women. Some states, including Jharkhand, took this further and allotted half of all seats to women. The objective of this reservation was to bring women out of their households and encourage them to be active participants in their community’s development and well-being, while facilitating their individual growth. By putting them in charge of their communities, it was hoped that they would help other women too, by looking into their oft-ignored issues.

Manju Devi’s feedback on Jharkhand Mobile Vaani is from a campaign initiated in late 2015 during Panchayat elections in Jharkhand by CREA and Gram Vaani, called ‘Meri Panchayat Meri Shakti Mujhe Bhi Gino’. The campaign’s objective was to encourage women to contest Panchayat elections and to educate them on their roles and responsibilities in elected positions. It also sought to raise visibility about the importance of women’s participation in the community.

One year on, how do EWRs fare in Jharkhand?

Many listeners – all men – responded to Jharkhand Mobile Vaani’s (JMV) prompt for feedback on this topic. The unanimous opinion was that EWRs weren’t doing enough. Nearly all listeners said the women were still within their household, while power rested in the hands of their male relatives – mostly the husband, dubbed the sarpanchpati. Most listeners attributed this to the women’s illiteracy, with some even suggesting that a minimum requirement of education to contest elections should be enforced (no such requirement was discussed for male candidates).

Perhaps unsurprising given the feedback came from men, the responsibility for EWRs’ poor functioning was squarely placed on the women. Only two listeners mentioned that the male-dominated, patriarchal society was responsible for this situation.

Indeed, the grip of centuries of patriarchy won’t fade away with three decades of reservation for women in Panchayati Raj elections. However, is it fair to say that EWRs who came in through the reservation have had no impact on their communities?

In 2010, AC Neilsen (now Neilsen) and ORG-MARG conducted a study across 23 states on issues faced by EWRs with their male counterparts, and what could be done to address them. The overwhelming result was that the reservation of seats was having a positive effect in encouraging more women to step out of their homes and participate in their community’s affairs. The study shows that EWRs work on issues of civic amenities (72 percent said so), while 62 percent work on mitigating domestic violence. Anecdotal feedback from JMV indicates that EWRs work on issues of sanitation and education amenities such as school playgrounds and mid-day meals, as opposed to men who typically focus only on infrastructure enhancement. These are important contributions to India’s progress towards Sustainable Development Goals (SDGs). Several studies in the recent years have shown that the reservation provision allows many women to contest and win elections, something they could not have dreamt of otherwise. Winning an election also enhances the EWR’s personal effectiveness and image.

To know the other side of the story, JMV spoke with a few EWRs. Be it Sarita Devi from Topchanchi block (Dhanbad district), Manju Devi from Chandrapur block (Bokaro district) or Sarita Mandal from Telo East panchayat (Bokaro district), they have ideas, ongoing projects and a vision for their community; they talk about provisions they are working on for drinking water to infrastructural development to schemes for the economic empowerment of women. Sarita Mondal was, in fact, re-elected to her post, which testifies to her good work in the community.

Several studies, including the AC Nielsen-ORG MARG survey, have highlighted that illiteracy is indeed a stumbling block to the full realisation of the EWR reservation policy. However, if formal education were a criterion for reservation, it might be another decade before India is able to fill all its reserved seats for women. The Right to Education Act, which makes education a fundamental right of every child aged 5-14, has only been in place since 2009, and only applies till the age of 14.

While education is definitely an important aspect of an EWR’s ability to fulfil her responsibilities, an EWR requires education in the day-to-day aspects of running a panchayat, which include awareness of her roles and responsibilities, knowing when and how to file an RTI request, etc. – she can, for sure, be supported by the other members of the panchayat in these endeavours. Initiatives such as CREA’s campaign are tuned towards building this awareness.

It also comes down to… the support of men.

An EWR still faces much discrimination as she attempts to go about her daily duties, from her male relatives, to the block officials, to bankers, to villagers in public – mostly male – who are simply unused to the idea of a woman in public. Stories abound of EWRs being humiliated, prevented from discharging their duties, etc. Add to this the layer of women from Dalit or other backward castes, and the discrimination increases.

Sadly, none of the male listeners of JMV who provided feedback on EWRs in Jharkhand, had anything to say about the lack of support from the EWRs’ male colleagues. The EWRs that JMV spoke to, however, talk about the importance of male members’ support in their duties and request them to lend a helping hand in discharging their duty.

“Most of my male colleagues do have a positive attitude towards me and my work,” says Sarita Mandal of Bokaro. “There are a few who are different but still support me – I only ask that they continue to do so.” Sarita may have a very positive opinion of her colleagues – one can only hope similar attitudes are prevalent for other EWRs too.

Towards this, Gram Vaani is working on a campaign that seeks to sensitise male members of the community as well as male officials with whom an EWR typically interacts as she discharges her duties. Through this campaign, we hope to challenge the overwhelming myth that EWRs are unaware of their responsibilities or are powerless, proxy leaders.

Listen to the EWRs that JMV spoke with here!