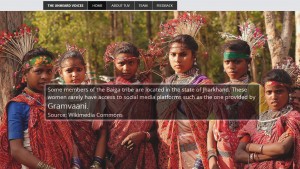 Our friend Anika has written a fantastic blog about audio journalism, created in a hackathon on women rights. Thanks Anika! Original link

This question has obsessed me ever since I first met Aadi Seth of the rural radio company Gram Vaani, years ago. GV and other similar projects have enormous troves of what we bloodlessly refer to as “audio data.” Over the past two or three years, companies and nonprofits that use IVR menus to create mobile-phone-based networks have racked up hundreds of thousands of users in India.

A few months ago, I listened to some of these data for the first time. Seth’s team sent me a list of clips about rural-urban migration. As I clicked through the translations and listened to farmers and villagers – in their native languages – describe the joys and heartbreak of being far from home, I realized something: these are great stories.

Seth shares a similar conviction. Enter the most recent Hacks/Hackers Delhi hackathon, which focused on finding new ways to tell women’s stories. I was keen that one group take on the challenge of working with these audio clips and designing an engaging, compelling web story around them. Luckily, GV had recently partnered with our hackathon partner, Breakthrough, on a campaign where they asked women to share their views and experiences with early marriage. They donated these audio data to us, each clip tagged with its location.

Led by Sonia Paul and Neil Holt, a team of coders, journalists and researchers spent the weekend dividing up the clips, translating them, and then building the web framework for an interactive digital audio-magazine.

For those who are interested, below are the screengrabs from their final presentation (h/t 100% Sonia Paul). In addition to being beautiful, they suggest a way to integrate and share voices from India’s rural regions. If you want to know about other projects from the hackathon, here’s the site.

If you want to join Hacks/Hackers New Delhi and be part of our next hackathon, you can do that here.

Why does this matter?

India’s rural, phone-enabled population is huge. Internet penetration is very limited. There are a lot of interesting stories – particularly those related to social justice and administration – that happen in these areas. India’s rural areas represent a big market and a big electorate, but are also fragmented by language and tradition. For companies like GV, there are commercial opportunities in tapping these markets.

But also – when we talk about issues like early marriage, there’s nothing quite like hearing about it from those who have actually been affected. These clips offer a glimpse into the social attitudes that prevail outside major metros, and offer a chance to more deeply understand why and how early marriage persists.

In terms of rural coverage, India’s major English-language media tend to focus on outlandish khap panchayat verdicts and persistent low human development indicators. Our goal was to find ways to disrupt and/or enhance this narrative.