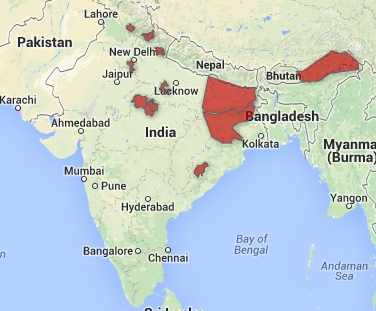 Thanks Lighthouse for carrying this fantastic article! Original link

Taking inspiration from popular social networks, Aaditeshwar Seth and Mayank Shivam sought to build a similar platform for those at the bottom of the pyramid (BoP), with the vision to use communication technology for social development. The duo incubated Gram Vaani Community Media at IIT Delhi in 2009, a social technology startup that has given a voice to the BoP.

The startup’s flagship technology ‘Mobile Vaani’, a voice-based social media platform equivalent to Facebook or Twitter for rural areas, has connected remote people with limited literacy to each other and the administration. In five years, Mobile Vaani has clocked 1.5 million calls, published more than 25,000 voice reports, and gets over 4,000 calls per day.

In recognition for bringing social inclusion through technology, Gram Vaani has won twice in a row at the mBillionth awards. Out of incubation and into an office in Delhi, the Gram Vaani team now consists of 25 members that contribute to operations, technology development, content development and management, business development and project management.

In this interview, CEO and Co-founder, Dr. Aaditeshwar Seth shares the journey and significant changes brought about by Gram Vaani in the last five years, provides interesting insights about Mobile Vaani and the challenges of technology in rural areas.
Mobile Vaani – a tool for self expression

The Mobile Vaani network makes use of an intelligent IVR (interactive voice response) system that allows people to make a free call into a number and leave a message about their community, or listen to messages left by others. This makes the technology accessible to anybody with a phone, and the only media to reach families without access to television, cinema, radio or print.

“Mobile Vaani targets the 100 million families across rural India, who have intermittent or in some cases, no access to the mainstream media, like radio, TV, Cinema and print,” Dr. Seth said.

Not only does it empower them with a voice, but also initiates local action, awareness, and empowerment. “The fact that Mobile Vaani is a bi-directional media platform, where the listeners feel empowered as they can provide their thoughts, comments and ideas in real time, creates the AHA! that sells itself to the Mobile Vaani user.”

The video embedded below explains the Mobile Vaani network:

Social networks often need to be moderated as content is generated by the users. While Facebook and Twitter provide users the control to flag abusive content, the content on Mobile Vaani is moderated centrally as users can only call in and leave their messages or listen to messages by others.

“A team of 8 members listen in to every comment, audio input that is contributed to Mobile Vaani, curate the content and then publish it on Mobile Vaani for the general public to consume,” Dr. Seth informed.

In the last five years, Mobile Vaani has impacted many lives positively. In a particular instance a young widow from the ST section was able to receive compensation for the death of her husband, a case that would have gone unnoticed otherwise.

She had called Mobile Vaani to narrate her story; there she spoke of her husband migrating to Delhi for work and of his sudden demise, which went un-reported till someone from Delhi connected with her and revealed the details. Her story was published on Mobile Vaani and shared with the Director of Labor department, Govt of Jharkhand, who then got the government machinery into action’

“The widow was paid compensation in accordance with government rules,” he shared.

Mobile Vaani has worked with numerous partners over the last 5 years. Prominent names among them being CEDPA, CINI, OXFAM, Sesame street, Merck and PRADAN.

It has been running the channel for PRADAN (Professional Assistance for Development Action) for the past 10 months with stellar success, due to which the NGO has been able to ramp up their operations in the state. This successful engagement has won the prestigious award from RMAI (Rural Marketing Association of India) recently and has received much publicity.

Oxfam India ran campaigns on gender empowerment, domestic violence, and land rights for women. Breakthrough worked for a campaign against early marriage. PLAN sponsored a campaign on child rights. The Grand Challenges ran campaigns to gather data on the state of health facilities, which led to several facilities actually improving their performance and bringing an indirect benefit to over 100,000 households.

“The benefits of this high quality data accrue to the rural focused initiatives deployed by governments, by corporates for their brand of products and services, by non profits who want to understand the needs of their target groups, etc.” he shared while describing the use of such data collection.

Together with the White Ribbon Alliance for Safe Motherhood, Mobile Vaani gathers data from pregnant mothers on the quality of care they received from hospitals and clinics.

“The questionnaire collects 18 variables from mothers over a voice call, and our initial research has shown that 20% of the data is more than 75% accurate, can be identified automatically, and is sufficient to build a detailed analysis of the quality of care provided by different health facilities.

This can provide not just information to people to exercise a choice, but also to demand better services wherever they are lacking,” he shared.

Bringing a variation to the traditional IVR system, Gram Vaani has built voice-based helplines called vAutomate, the idea for which emerged from understanding the needs of projects managed by various partners and clients working in rural geographies.

vAutomate includes vHelp (voicemail system which allows inbound calls & outbound pre-recorded messages administered on an online interface), vConnect (voice-based ‘discussion-board’, where callers listen to a series of FAQs, unanswered questions, and leave their own answers), vSurvey (an integrated polling application), vAct (community based ticketing and support system), vInform (an automated tool for broadcast of information and advisories using voice and SMS, to a large population) and vTrain (voice-based training solution, to guide a large number of agents through several voice-based modules of training)

With the use of V-Automate solutions, project managers can engage with their target community, generate the reports on the quality of engagement in real time, and create social audit reports on demand.

Indus Action is using vHelp to run a helpline in Delhi for guiding parents on EWS enrollments in schools. Pratham Skills is starting to use vAnswer to run an FAQ for trainees to learn about their programs and express an interest. Pukar in Mumbai is using vSurvey to gather feedback on its community interventions. Oursay is using vConnect in Chennai to run India’s first IVR based campaign to engage citizens in local governance.

Dr. Seth shared a recent use case of the V-Survey tool by a social enterprise called Shubham finance that wanted to get consumer feedback on the services that they provide to the un-banked in the housing sector.

“With the use of the V-Survey tool, Shubham finance was able to get 70% participation from its user base spread across Delhi NCR, Haryana, Gujarat and Maharashtra at a fraction of a cost and generate high quality, qualitative research reports.”

Out of the 125 operational community radio stations in the country, 32 use the GRINS platform to run their FM stations. “We command the major stake in this vertical,” Dr. Seth shared.

GRINS growth is contingent to removal of bureaucratic bottlenecks in approvals by the Government. “If clearances are given under a single window system, we believe that the community radio eco-system will flourish and so will the business for the GRINS technology,” he added.
Challenges in finding solutions for the rural community via technology

While the country is amongst the fastest growing smartphone market in the world, 81% is still dominated by feature phones, as per a study by International Data Corporation. Tech startups like Utopia Mobile are enabling access to Facebook and Twitter on feature phones without internet, using Unstructured Supplementary Service Data (USSD) technology, the same technology which is used when a user needs to send a message to the operator to know his mobile balance.

On the other hand, India is also experiencing an explosion of messaging apps, that going further might innovate to reach the rural millions. Facebook’s $19B acquisition of messaging app, WhatsApp and partnership with Unilever to drive the vision of Internet.org, is also a move in the direction to empower marginalized rural communities.

Does all of this pose a threat to Gram Vaani?

“Mobile Vaani business approach has been bottom up…meaning that we looked at the largest user base of mobile users, who can only afford very basic mobile phones. We believe that for this large user base to move to feature phones and smart phones will depend on their economic conditions, which we foresee will take between 10-20 years,” Dr. Seth shared on the foreseeable challenges for Gram Vaani.

Sharing the future plans, he added, “When this current user base is ready to migrate to better phones in the future, Mobile Vaani will seamlessly upgrade to new platforms and thus continue engaging with the base, which would have grown organically through our tried and tested processes.”

“We respect the competition that we have from U2opia and other innovators, but we firmly believe that in order to get the lions share of the listener bandwidth, we have the better model.”

Going by the impact created, Gram Vaani does have a better model when it comes to a voice-based social platform for those at the bottom of the pyramid. Organizations in the social sector that need to connect with rural and low-income communities can connect with Gram Vaani here.