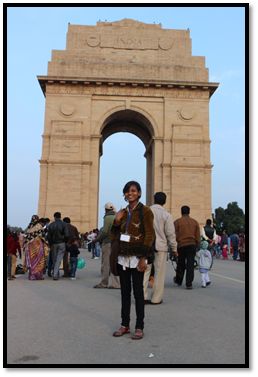 Brimming with exuberance, 16 year old Neha Bhatt, Jharkhand Mobile Vaani’s (JMV) youngest reporter set off from her village in Baghmara block of Dhanbad district. Never stepped out of what Neha calls “Mahuda Zone” in her block, she was accompanied at first by her father Shivpujan Hazari (a dedicated JMV reporter himself) to Ranchi and then by Saraswati (Content moderator with Gram Vaani) to Delhi for a two day workshop organized by Khabar Lehariya on setting up a network of women journalists working in the community media sphere. When asked about how she feels, she replied with much enthusiasm, “I never thought that due to my association with JMV I will get an opportunity to travel to our country’s capital! In my village, it is very uncommon for girls to be outspoken, to keep mobile phones with them, to go out of their houses. Every time someone does either of this, they are looked down upon and a lot of rumours are spread about such girls. I give my father the credit for introducing me to JMV and pushing me to perform better, in spite of the initial resistance faced by the village folks.” Working predominantly in the villages of Mahuda Basti, Baghmara Block on highlighting the irregularities in government schemes and entitlements of the common man, Neha alongwith her father scripts a lot of songs, drama and poetry which she records on JMV. She says that the feedback from the listeners in her village goes a long way in improving her contributions. She says, “Before being an active contributor on JMV, I barely used to talk loudly in front of elders. However, after my contributions were aired on JMV I started receiving appreciation and positive feedback about improving my style. This went a long way in removing my hesitation in talking to people.”

Neha has indeed made a long journey, not only literally but figuratively as well. Her primary motivation of joining JMV and becoming an active contributor was her thirst to meet the people whom she hears contributing content on JMV, most of whom being men, so as to be able to put forth the issues of women that sometimes go unrepresented. She says, “In the community or village even if one woman stands up, the other women are inspired as well, thinking that if that woman can move ahead and do well in life then even I can do the same. I belong to a rural area, from my district Dhanbad, I am the only woman caller who has come so far because of my participation in Jharkhand Mobile Vaani. My friends are now thinking that if Neha can go to Delhi, the capital city of India, and speak up in front of other people in the workshop, then I can do so as well. There are women elder to me who after looking at my example are trying to join in to Jharkhand Mobile Vaani and participate.” Mixed feelings gripped Neha’s family as she was leaving for Delhi from her village. While, a few of her friends and relatives asked her to visit India Gate and see as much as of Delhi as she can, there were others who were thinking that they might never see her due to the high incidence of trafficking of girls from their village. Now, when Neha has got back to her village after participating in the workshop and touring around Delhi, her family can’t believe that Neha is back from Delhi without a scratch and is immensely proud of their girl’s achievement.

As for the feedback from the fellow women journalists in the Khabar Lehariya network, the women unanimously exclaimed that to possess the kind of thought Neha has for her age, marks the beginning of a revolution where her generation might lead them to their goal of women having equitable say and representation in the community media sphere.