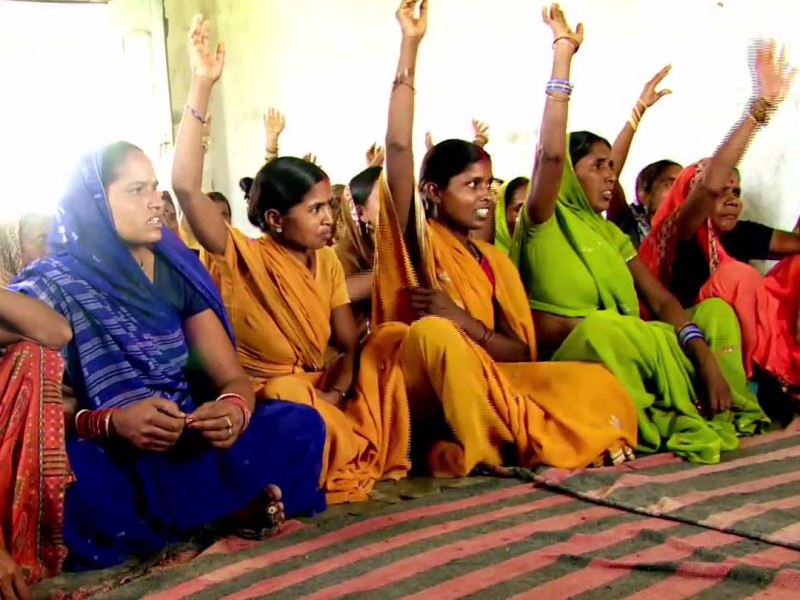 Neha is a proud, beaming 16-year-old. Standing on the lawns outside Delhi’s India Gate, she speaks to the camera about how she is the first female volunteer with Jharkhand Mobile Vaani– a voice-based social network for rural India – to get an opportunity to visit Delhi for a workshop. She talks about how she visits several villages, interacts with the communities and village heads and relays news from the villages on Mobile Vaani. But most importantly, she talks about how she and other female volunteers with Jharkhand Mobile Vaani have learnt a lot – to travel, meet people, discuss issues with them – and present these issues with confidence on Mobile Vaani.

Much has been written about the role of technology in increasing access to information, helping lead to attitude change and strengthening accountability of governments and institutions. Technology helps us reach people we haven’t been able to reach before, and technology helps us talk about topics that are sensitive and often don’t find a place in mainstream community discussions – such as on sexuality or early marriage or domestic violence.

At Mobile Vaani, for instance, hyperlocal news – at the block or Panchayat level – is reported for the benefit of the community, and campaigns are run on a range of topics, ranging from sexual and reproductive rights, to maternal health, to early and child marriage, to the functioning of public health institutions at the village or block levels. All of this is available to people through a number they can call from their mobile phones, following which they can select options to listen to news, record their opinions, or catch up on the latest bits of information on a campaign they’re interested in. Started in 2012 by Gram Vaani, Mobile Vaani today reaches over 100,000 people in rural areas in 25 districts across Bihar, Jharkhand and Madhya Pradesh.

However, all this hasn’t happened organically, simply through the power of technology. Technology adoption needs to be nurtured – a ‘human touch’ is critical to extending the use of technology to people at the periphery, such as women, people from low-income groups, people living in far-flung rural areas, etc.

This belief is central to Mobile Vaani’s community volunteer system. Our volunteers are community members who spread the word about Mobile Vaani among the community, collect from community members news and happenings, conceptualize new and locally relevant ways in which the platform can be used, and use their contacts and influence with local governance officials for grievance redressal.

In this article, we discuss our experiences in bringing women users on to the Mobile Vaani platform.

A significant reason why fostering technology adoption among women users is hard, is simply poor access to mobile phones. Access that women – especially those in rural India – have to mobile phones is limited, putting them out of reach of services such as ours, or other trade or information gathering opportunities. Only 1 in 3 women in rural India owns a mobile phone, according to the National Family Health Survey-4; most women who access mobile phones use their male relative’s, and their use is strictly monitored by the male family member.

In a different project however, in partnership with Gram Tarang, we set up a platform, Tarang Vaani, for young migrant women from Orissa living in Bengaluru to connect and share their stories. The women engaging through Tarang Vaani are all young, and who, by virtue of having left their homes and villages, possibly for the first time, were ‘allowed’ to own mobile phones – a basic smart phone. The Tarang Vaani platform is exclusively used by women only, and has become a space for them to share stories of the process of their migration, folk tales, songs and personal experiences. However, it took several months of comfort with using the platform and with sharing their thoughts for the usage to stabilize and sustain itself.

Another way to overcome technology literacy barriers is to create spaces for women where they physically meet each other, and then use the technology to initiate discussions and information sharing activities in these meetings. We are working through this pathway in Bihar with women Self Help Groups (SHG) organized by JEEViKA, where even when only 2-3 women of the SHG have mobile phones (out of 10-12 SHG members in the group), there are vibrant discussions that happen during the SHG meetings, initiated by the SHG leaders who dial into Mobile Vaani and have others listen to the content during the meetings.

Calling into the platforms and listening to content is only the first step – encouraging the women to share their thoughts on the platform is even harder. Mobile Vaani faces barriers in increasing female participation in discussions on the IVRS; while campaigns that are focused on women have many female listeners who record their opinions, few women raise local issues for grievance redressal, report local news or share their opinions on ‘hot’ topics publicly. Dr. Orlanda Ruthven, who is the head for workforce programmes at Gram Vaani, suggests that this could be because news and public discussions, in the Indian rural context, are seen as belonging to the male sphere. “Campaigns do get traction from women, because women receive pre-recorded information and record their responses to it,” she says. “However, where user-generated content – bottom-up information, such as local news or grievances – comes into the picture, few women actively voice their opinions. Communities automatically assume that this is a space for men, where women don’t have much of a role to play,” says Dr. Ruthven.

Indeed, campaigns where women are the key target audiences see high participation from women, receiving hundreds of calls per day. Episodes of Oxfam’s campaign on maternal health, or CREA’s campaign informing women about the reservations available to them to contest Panchayat elections, or Tarang Vaani reaching out to young women migrant workers in Bangalore, have been heard thousands of times and get active participation from the women as well.

What this tells us is that for participation of women in the ‘public sphere’ that technology enables, we need to re-imagine what we can do to facilitate women’s access to these spaces. We are reconsidering, for example, how our ‘club’ model – of volunteers drawn from the community – could be reshaped to bring more women in as listeners and callers. Most of our current volunteers are men, and their mobility within local communities makes it easy for them to approach other men, but can we build women-only clubs that provide a more accessible space for women to listen and contribute in public discussions?

We are also exploring the issue of trust between users and the platform – can the initial adoption by men, and consequently the high degree of trust established between them and the platform, be leveraged to encourage them to share the platform and messages with women members in their households? Another pathway we are keen to experiment with is to mobilise listeners and participants via schools, so that young women – who are likely to be far more technology savvy than their mothers – are the ones to adopt the platform and then encourage wider use within their family.

We don’t have all the answers yet, but we acknowledge that in rural India, we do need to put different ideas to work to have more women adopt technology platforms and participate on them. We hope that through our efforts, women can move from being peripheral users of our technology to core contributors, adding different voices, colours and ideas of their own.

Gram Vaani believes in using appropriate technology and people driven processes to build participatory media networks that can empower communities. Mobile Vaani is a platform developed by Gram Vaani that seeks to serve as a social media network for rural India, based on and IVR (interactive voice response) system.

This article was originally published in the August 16, 2017 edition of In Plainspeak, an e-magazine on issues of sexual and reproductive health in the Global South.